Getting Ready for Camp Quest AZ 2017

In February, I mentioned that we’ll be building Beetle Bots at Camp Quest AZ in June. These machines are simple but they scurry around a floor like a manic Roomba. They bang into things, turn, and scurry off in another direction. The campers will have at most 4 hours to assemble their robots which means that I need to make sure their time is spent efficiently. Over the past several weeks I’ve been ordering components including: small motors, lever switches, slide switches, LEDs (for eyes), batteries, the beetle bodies, connecting wires, and tools. The campers will have four hours but the time will be divided over four separate sessions. At the start each camper will receive a kit of parts inside a small shoe box sized container. Since I may have as many as 24 campers participating in this activity there needs to be a place where they can store their projects between building sessions. Last year we built Tin Can Robots and I used a shoe rack. While it worked OK, it wasn’t perfect and definitely too small for this year’s activity and the lids were too big to fit. I needed a new rack that would hold the larger number of boxes with their lids in place. 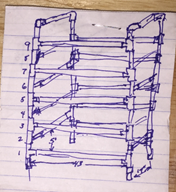 I’ve had some experience with PVC tubing and fittings and decided to sketch out something that might work. I started by measuring the size of the boxes.

Then I bought the necessary tubing and fittings.

To make them look a little better, I cleaned the pipes with acetone and started fitting the parts together. 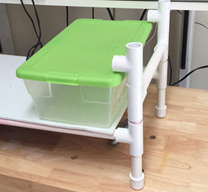 I made the shelf materials out of political sign material that I collected a couple of days after the November 2016 elections. Once the first layer was completed, the rest followed naturally. The entire project cost less than $35 and it can be disassembled if necessary. It was a bit of work and took a bit of time but during the assembly, all other challenges disappeared and all I could think of was how wonderful it will be this year at Camp Quest AZ 2017. (June 25-July 1) I can hardly wait. 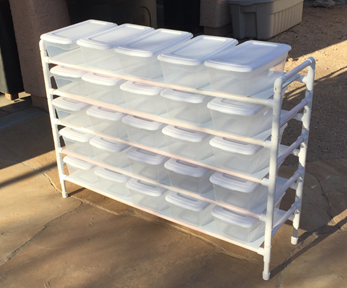 6 Responses to Getting Ready for Camp Quest AZ 2017