Brother Jed is in Town 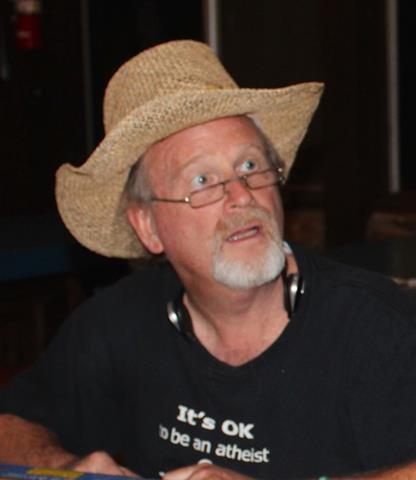 Every year about this time, Brother Jed (Smock) comes into town. Honestly, I like him and his wife Cindy. They’ve been following the weather around the country to various universities for a long time. I first saw him at the University of Colorado in 1981. I didn’t stop and listen to him back then. I was a bit busy getting my Electrical Engineering degree which was an endeavor that actually seemed to take more time than I actually had. In any case, he was there near the student union preaching to the students and trying to convince them to turn to the God of the Bible and not follow his ribald college experiences (which he proceeded to describe in great detail). 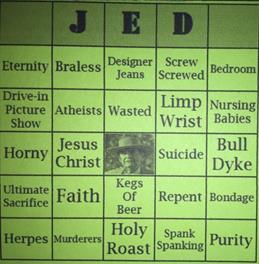 Brother Jed, the traveling evangelist came to our town for the last days of February. I supported the SSA of the University of Arizona with cards and prizes for their “Brother Jed Bingo” activity. It is the single most effective recruitment activity that the club has during the year. I printed up several hundred bingo cards with the words and phrases that Brother Jed typically uses. I also supplied several pounds of candy to be used as prizes for the winners. Also, they used some of the tabling supplies provided by American Atheists. They were particularly fond of the buttons. I handed out American Atheists water bottles to the club officers.

Often times, I sit with Brother Jed and Cindy when they’re not “on stage.” I tried sitting with one of the traveling evangelists that followed Brother Jed this time. That was a big mistake. The individual that I sat with was plum full of alternative facts. He claimed he had the equivalent of 5 Phds due to his reading on subjects. He had NO degrees especially NO Phds. He claimed that an angel took him to the beginning of the universe 6000 years ago and he personally witnessed the Creation. Then, he took great umbrage when I told him that that didn’t happen. I know right? Well I actually admitted to him that I couldn’t positively know that he didn’t experience the things that he claimed but that I will dismiss the account because of my experience and knowledge of science. Then he asked if I have empathy. I told him that I donated to a worthy cause that very morning. That’s when he called my empathetic actions—self-righteous. I must admit, dear reader, that I may have lost my temper a bit. But I didn’t assault him or call him a name. I walked away. I’m looking forward to seeing him again tomorrow. Admittedly, I was not prepared for his level of stupidity. I will see him tomorrow. Let’s see what happens. Proverbs 27:1 says: “Do not boast about tomorrow, for you do not know what a day may bring.” But I’m ready for him now!