Scraps of This and That

It’s a day after the 2020 election was called for Biden. It’s been a tense time for the Lacey household. Nancy, me, and Vector were all hoping to not have another four years of Donald Trump. Honestly, the thought of that maniac in the White House for another four years was scarier than the Covid 19 pandemic that has brought the country to its knees, and it is deadly for someone my age. The very thought never left my mind for long. I sat down a few times to write for this Blog. I couldn’t concentrate long enough. I ended up with a collection of unfinished posts.

Last night Nancy and I had a couple of bacon wrapped sirloin steaks a tossed salad and a bottle of Rose Champagne and at noon today my blood pressure was back in the “normal” range. 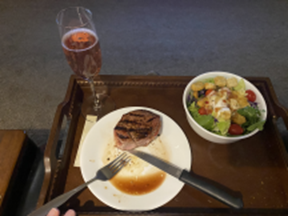 I’m looking forward to once again having a professional at the helm. One that knows what he’s doing. This past four years have been the nightmare that I thought it my be in the blog I wrote on November 10th, 2016 called, “Shock and Ahh…Shit.” I was hoping for the best but the reality was far worse than I had anticipated, and that doesn’t include the current pandemic.

One of the things that stands out for me is the fact that he was quick to claim credit for things that he couldn’t possibly have accomplished. Three months into his presidency he claimed undue credit for revamping the United States nuclear arsenal. As Air Force acquisition professional, I can tell you that you can’t do anything in acquisition and modernization in three months. Each of the weapon systems I worked on including the B-1B Bomber, the Global Hawk Unmanned Air Vehicle, and LADAR weapons took at least 7 and in most cases 11 years to bring online. Nuclear systems are more demanding than any other weapons system in the entire Department of Defense and will take an estimated 30 years to modernize. He did write a memorandum on Jan 27, 2017 ordering a new nuclear posture review, but writing a memo is a far cry from “revamping.”

There are quite a few things that Mr. Trump claims that he’s done that he didn’t. I can’t cover all of them. The four years of fabrications would be impossible to cover in a brief blog. I only went into detail on the nuclear arsenal because it was one of the first outrageous claims and it is one where I could add the benefit of personal experience. In the first 100 days alone, 492 false or misleading claims were documented. There were false claims about jobs, immigration, foreign policy, health care, the economy, his own record, the election (remember those claims?), crime, trade, and taxes. That was just the first 100 days.

Couple that with the fact that he never took responsibility for things going wrong. “For Trump, the buck always stops somewhere else.” (Los Angeles Times) While it happened quite a few times in the past four years, his claims about the current pandemic are rather noteworthy. He screwed up every aspect of the situation and his responsibility started well before the virus came out of China. Trump disbanded NSC pandemic unit and cut the budget of the CDC in 2018. He didn’t fire everyone, he but half of the people working in the office lost their jobs. He eliminated the office especially made to handle the COVID 19 situation. The travel ban was late and ineffective. His handling of the PPE was abysmal. The kicker is that he rated his performance as a “10” and that he was doing a great job.

Well, that went too fast. I was going to include some other stuff that I’ve been trying to write about but I didn’t get to it. Tune in later and I have a couple of good personal stories about 2020 that I’d like to share.