38 Days of Quarantine: Another Robot Unboxed 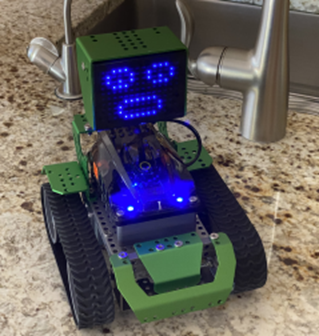 I bought a few robot kits late last year and early this year. I also bought some robot associated kits. For example, I bought a robotic arm driven by hydraulics. I buy these things for evaluation and get ideas for a robotics program at Camp Quest Arizona. Camp Quest Arizona was scheduled for the end of June, but it is cancelled for this year.

This is my second kit from RoboBloq. It’s called Qoopers. .” This high-quality kit costs about $150 (from Amazon). In the kit, there are parts for 6 different configurations. The one pictured and the one I built is called “Captain Alloy I also had the option of building a two wheeled “Scorpoid” version, an obstacle avoiding “The Voyager” version, the “Li’l Guardian” version, “The Dozer”, and “The Cavalier” version. An unboxing video can be found here.

It took me about an hour to assemble and since I previously downloaded the RoboBloq application on my iPhone, it took me no time to start driving it around my living room. Previously, I built the Q-Scout from the same company (RoboBloq) which costs half as much. The Q-Scout and the Qoopers are remarkably similar. The Q-Scout was a bit easier to assemble probably due to the fact there was only one option whereas the Qoopers can make six different robots. There are many more fasteners required on the Qoopers and most of them need back up nuts. The Q-Scout had fewer fasteners and almost no nuts because the threads were cut into the metallic parts. The Q-Scout has two powered wheels while the Qoopers has a pair of tank treads. The motors on the Qoopers are also more powerful.

The parts and fasteners reminded me of my Erector Sets that I had when I was a boy except these were high quality. My Erector Sets also did not have a brain module either. I enjoyed building these two robots and it was great to have the opportunity to play with them a bit. So far, I’ve been using my iPhone to control and program them, but Nancy is giving me her old iPad which should make the programming a bit easier. I don’t think I can build a Camp Quest Arizona program around them. While at camp we discourage the use of iPhones and iPads. In order to operate the robots, you’ll need one or the other. However, I might have a short “free-for-all” robotic activity where these guys will be participants and the campers will be able to interact with them for fun and the experience of interacting with robotic devices.

Stay tuned! I’ve got quite a few robotic items in storage and there seems to be no better time than now to break them out.

1 Response to 38 Days of Quarantine: Another Robot Unboxed