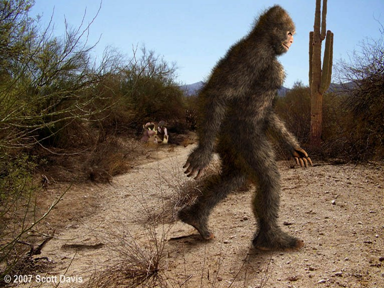 The Camp Quest AZ mythical creature is Muggy—a bipedal humanoid wild creature thought to be a native of the Mogollon Rim. Every Camp Quest has its own mythical creature. I believe when Ed Kagin first started Camp Quest in 1996 in Boone County Kentucky for the children of secular families he played a game with an invisible unicorn in his garage. It was a challenge aimed at showing that a negative could not be proven. Back then, there was only one location for Camp Quest. Now, there are 14. Camp Quest Arizona is one of them.

This year we had 46 campers including 6 LTs (Leadership Trainees). Campers age from 8 through 15 and LTs are aged 16-17. We also had 21 adult staff members. Including a Camp Director, Facilities Director, Programs Director, Camp Cabin Director, Medical, LT Director, 4 Program Staff and 11 Cabin Staff.

From my point of view, everything went well. We had 8 electives this year. Each camper gets to select two. This year they got to choose from: Archery, Fishing, Drama, Drumming, Robots, Rockets, Self-defense, and Survival Skills. My elective was building robots. All 13 campers that signed up to assemble Runner robots were successful. For the last hour of our 4 hour program they played with the robots in a small arena made of lawn edging material.

I also had the pleasure of introducing all the campers to the history of the catapult and we built two versions—the onager and the trebuchet. It was great fun being the target after assembly. The ammunition were Nerf Rival foam balls, completely harmless when hurled by catapults made from popsicle sticks and tongue depressors.

Also, I showed some of the campers how to build an analog clock. (You know the one with the face and the three hands?). They each decorated their own clock faces with stickers and markers. Then we attached the movement. Once the battery was inserted (properly) the clock started working. Hopefully, the campers will put their clocks on the wall to remind them of what a wonderful time they had at Camp Quest Arizona 2019. 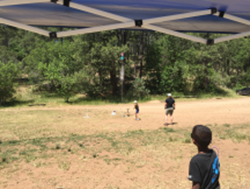 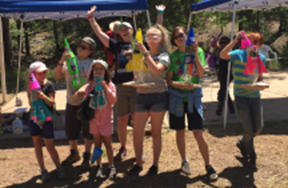 The other “maker” elective was Rockets. Lauren taught her group how to build and launch rocket made from old soda bottles. This was the first year for this program and the campers that selected it had a great time building and launching their rockets.

The LTs (16 and 17-year-old campers that help with camp operations) had a maker activity as well. They upcycled refuse items back into usefulness.

Camp Quest AZ 2019 high lights: (leaving out the meals and such)

Day Before—Most staff check in with their children (if any).

Fifth Day—Same as Second Day (except for the LT run Carnival in the evening), bed.

Sixth Day—Same as Second Day (except afternoon activity is replaced with free time and skit night in the evening), bed.

I might write more on Camp Quest AZ in the future. There’s a lot of detail missing in the quick listing of highlights above. I’m glad I went, and I’m glad it’s over too. I think everyone that went enjoyed the experience but are now feeling a bit sore, a bit tired, but overall satisfied with this year’s Camp Quest Arizona!