A Day That Will Live in Insanity 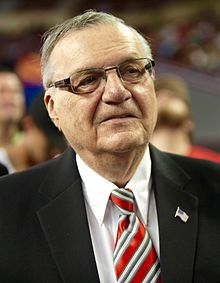 We are indeed living in “interesting times!”

The President pardoned Sheriff Arpaio. The sheriff now says that his political career isn’t over. Apparently, we’ll have more opportunities to see this xenophobic, sadist violate human rights, oh goody. Lest we not forget a judge found Sheriff Arpaio guilty. Once that happened, his guilt or innocence is not any longer a matter of opinion. It is a matter of law. He was convicted of judicial contempt. The president says that he believes that Sheriff Joe was “doing his job” when he racially profiled U.S. citizens and illegally detained them without charges but I believe that Judge Susan Bolton doing her job.

All of that is bad enough but we were told of this travesty of justice the very day that one of the deadliest storms we’ve seen in a while, Hurricane Harvey, is bearing down on the coast of Texas. The Washington Post is currently reporting that at least nine people are dead and 300,000 people are without power. A Category 4 hurricane is hard to ignore, very newsworthy.

The President doesn’t like “sharing the spotlight.” Could it be that Sheriff Joe just benefited from Mother Nature’s timing? Did Hurricane Harvey move up the date of Sheriff Joe’s pardon? No one knows really.

I’m sitting here hoping for impeachment. Now I know how the religious folks feel when they are awaiting the apocalypse.

1 Response to A Day That Will Live in Insanity