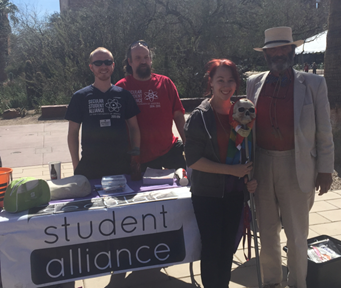 In the February 25th issue of The Daily Wildcat there is an article entitled “Campus Preachers: Do They Belong?” The article is primarily in response to Brother Jed’s annual appearance at the university but apparently the “street preachers” are an everyday event.

Brother Jed (Jed Smock) finished his visit to the University of Arizona campus a couple of days ahead of this article. His crew of 8 people invaded the U of A mall around noon on February 18th. The Secular Student Alliance uses his annual visits to bolster their membership by sponsoring an activity called Brother Jed Bingo. He has been doing his “confrontational evangelism” for quite a while and has visited every state at least once. His home is in Indiana and he follows the seasons. Spring time is an excellent time to visit Arizona and that’s why we see him about this time every year. I first saw him in the early 80s at my campus at the University of Colorado. He appeared there with his now wife Sister Cindy. Jed and Cindy have been married 33 years and have 5 daughters. Two of his daughters are married. There were times when his daughters would be with Jed and Cindy but not this year. This year they brought with them a couple of young interns, Joshua and Kirstan. Also in the Campus Ministry USA contingent were: Sister Pat—an 86 year old lady, Brother Mikhail—young and energetic preacher from Russia, Brother Ryan—a traditionally dressed young preacher, and of course Dean—a fixture of the U of A mall until he moved to Phoenix. (Most people that I’ve talked to on the campus don’t miss him.)

While the preachers tend to offend and insult passing students, there is little doubt that they are covered under the concept of free speech. Some of the most offensive slogans include: “You deserve rape”, and “You deserve hell.” The second one could be justified in their holy book but the first one is definitely extra Biblical. Personally, both statements can be taken as simply a matter of opinion but calling passing students whores or perverts crosses the line, in my opinion. Personal verbal attacks should not be tolerated on the campus.

Also, free speech is NOT blasting out noise that effectively stops all communication. A few students brought out an electronic noise maker that blasted out high decibel warbling sound. There was no point to it other than to disrupt. Free speech is important and necessary for exchange of ideas. Drowning out all communication with noise or pointless music does not fall within the spirit of free speech.

The SSA (Secular Student Alliance of the University of Arizona) uses the annual visit of the travelling preacher to their advantage. As the only student club on campus specifically for non-religious students, the club needs a constant source of new students. College campus clubs loose members every year and recruiting more members insures that it will exist the following year. It turns out that Brother Jed is the best recruiter that the SSA could hope for. Jed creates a crowd with his often ribald stories that appeal to the students. While Jed is entertaining the students, the SSA passes out their Brother Jed Bingo cards that encourage people to visit them at their table. 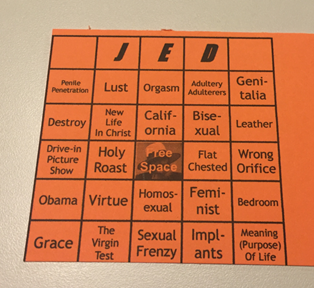 to pull out key words from his rhetoric and create Bingo cards. To be fair, his presentations are entertaining and sometimes he uses words and phrases to color and keep the students engaged. For example here are some of the words you might find on your Bingo card: Grope, Cheap Thrills, Wicked, Margaret, Bedroom, Fear or Trembling, Squeeze, and Virgin. Some of the words might be considered rude in polite company. The SSA hands out the Bingo cards and the students listen for the key words. When they get a Bingo, they are rewarded with a piece of candy provided at the SSA table where they’ll get a chance to talk with the club members and sign on to their email list. It’s a good time.

Instead of trying to limit Jed’s free speech, the SSA is using it to their advantage. Check out the club at the following websites:

See you next year Jed!