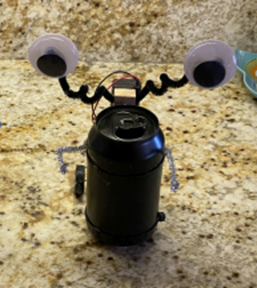 It’s time again to head up to camp, collect beads, and build robots. Of course, that’s just how I see it. The last time that we had a Camp Quest sleep away camp was the summer of 2019. I was getting ready for CQAZ 2020 in March of that year. Then came COVID 19, and everything was cancelled, and preparations were put on hold. There was a day camp and some hikes in 2021 but the weeklong sleep over camp didn’t happen that year either. So…after a 2-year hiatus, CQAZ will happen. It begins on the 25th of June and ends on the 2nd of July.

Early this year, I dusted off the previous preparations and picked up where I left off.

I had all the components for the “BevBot” pictured here. It’s a robot that moves and wobbles. It starts out as a beverage can. Amazon sells a similar “Tin Can Robot.” It costs about $10 but it has a lot of little, tiny parts. Also, it may take more than an hour to assemble. The cost isn’t a big issue, but I planned on every camper to build one. That means, I’d be buying about 50 of them. It pays to assemble my own kits. The tiny parts are a problem because our craft area, where all the “making” happens, is a wooden deck complete with narrow slots. Over the years, we’ve lost a lot of hardware through those slots. The campers have an hour to assemble and test out their robots. The resulting kit has only a few parts, no tiny ones, and builds fast.

My second robot build for this year’s camp I call “JoustBot”. Before camp was cancelled in 2020, I had started thinking about the more involved, elective activity. Campers choose 2 electives out of 8 or so that are available. The electives include normal summer camp activities such as archery and wilderness survival skills or they can choose fishing, drama, self-defense, or the national award winning “Mythical Creatures” activity. Since they can only pick 2 and there are many to choose from, I’m safe in assuming that I won’t get half of the campers. With that logic, I prepared 21 kits. The time allotted to an elective is 4 hours which consists of 4 one-hour sessions. More time allows a “maker” activity, such as JoustBots or Mythical Creatures, to be a little more demanding of the campers. 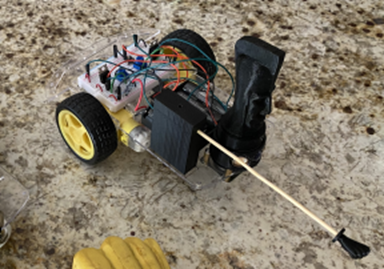 JoustBot started out as a simple beam-following robot. Shine a light on the robot and it will move toward the light. As before, I pulled inspiration from what was available online. I bought the BlueBot to evaluate. The robot has all the materials to perform line following, beam following, obstacle avoidance, or motion sensing. Of the four, the most interesting to me was the beam following (light-tracking mode.) The robot used breadboard which allowed circuit assembly without soldering. The circuit also had very few components. I discovered that it worked as advertised but I didn’t need the full capability of the BlueBot and, more importantly, I didn’t need to spend $100 for each kit. I bought a chassis kit and all the electronic components in bulk. I did all this right before March 2020 when it was announced that we wouldn’t be having CQ 2020.

Summer of 2020 came and went as did 2021. However, 2022 is not going to pass without a week-long, sleep over, Camp Quest summer camp. I wasn’t totally ready, but I was most of the way there. I could have run the events planned for 2020 but I made the BevBot a bit simpler and changed the Beam Following robot into one designed to joust.

The rider on the JoustBot is sits on top of the sensor pedestal and is held in place with a magnet in the base. The lance is held in place by a 3D printed mount to the right of the rider. The campers can joust with other campers while at camp. After camp, the robot doesn’t need to joust. It can still be used as a beam following robot.