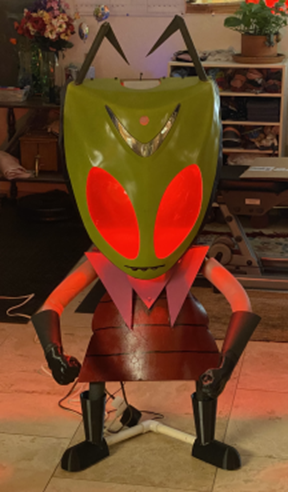 Are you feeling it yet? Things are starting to get back to normal after the pandemic. Frequent readers of this blog will know that this means I’ll be getting ready for Halloween six months ahead of time. However, before I can properly prepare for the next Halloween event, I must take care of a few things. The theme for the Lacey’s Haunted Graveyard for 2019 was “Aliens from Outer Space.” (If you watch the highlighted video, you need to skip to the 4:30 mark to see the start of the UFO themed display.) In the interim, the displays were all packed into a very crowded storage shed. Invader Zim was packed on top and had to be moved out to get to other stuff in the shed. In the process, he was moved to the back porch. The wind and the weather did a number on poor old Invader Zim and he ended up looking a bit like a Picasso drawing. One of his big red eyes fell out. Somehow, one of his arms ended up sticking out of the socket. His head fell off too. Some of the hot glue joints let loose. In short, he became a pile of unrecognizable pieces and parts. However, when I plugged in his electronics, he could be heard saying, “My tallest, my tallest, my tallest…” I had to decide—Should I toss him or fix him? The 2021 Halloween theme will not involve UFOs or aliens but still…he has a special place in my heart. He came out of the fact that I

found an abandoned slightly damage motorcycle faring on a dirt path during a Geocaching adventure. I love turning other people’s trash into useful items. Invader Zim is a fine example of upcycling. Before I can start preparing for the new 2021 theme, I decided to take care of him. Perhaps someone else will want him for their display.

Here is the faring I found in the field. I drug it home because I saw something alien in it. I didn’t know what though. I posted a picture on a Halloween DIY FaceBook page, and someone commented, “My tallest.” I didn’t know what the hell she was talking about, but my Google Fu was strong, and I soon found Invader Zim. As a boomer, I was not familiar with the cartoon. I watched a few episodes. There was an “Invader Zim” in there. I just had to bring him out into the world. I’ve told this story previously in a blog post back in September 2019. So, what is new? I bought a 3D printer in November 2020. Since then, I’ve found many things to make. I decided to make some 3D parts for him.

First, I cleaned him up and reassembled him. This required a bit of elbow grease but easily doable. His shoes were made of 1/8″ black foam, hot glue, and electrical tape. They didn’t survive the elements very well. He needed new boots. His hands (hands are hard) were made of foam covered with a black latex glove. I thought I might do better.

I started with TinkerCad and designed a new set of boots. These are better than the original pair and should last. Next, I found an upraised fist and manipulated it to fit the size I needed. It was a simple matter to mirror the right fist into a left fist and print them both out. Of course, 3D printing takes a while. It’s best to have the printer work while I sleep. I tend to watch the printer for too long when it’s working. The total time it took to do Zim’s “upgrade” was about a week, but most of it was done while I was sleeping.

He’s done now and ready for storage. Likely as not, he’ll not be used in a Halloween display in the future. I don’t know what’s going to become of him. Having an Invader Zim made from a discarded motorcycle faring is not the point. He served his time, though. I’m glad I made him. The point of fixing him up though was to meet the challenge of repairing him. Maybe I’ll bundle him up with a few other “Aliens from Outer Space” props and sell them locally to someone that would like to have their own “out of this world” display for the next Halloween.