A Safe Place for Gort

Here it is mid-September and I’m missing normality more than ever. Normally, I’d be deep into Halloween preparations. Actually, I would have started the effort a couple of months ago. Last year the theme of my display was Aliens from outer space. The most complicated new prop from last year was “Gord.” He’s a bit of a mashup of a Halloween Pumpkin and a silver robot from the movie The Day the Earth Stood Still. He was the star in a scene which included a UFO and a couple of Pumpkin Aliens. I got the idea for the Pumpkin Aliens from the Hallmark Channel before I decided to build “Gord.”

I probably wrote about “Gord” and the display last year. However, He came back in my life recently because he needed repair. His “kill” light lost a few LEDs and I thought I might do a better job on the visor that comes up during operation. All the Halloween stuff that I’ve built over the years has been building up as you might guess. It’s becoming a bit of a problem and you can look at “Gord” and tell that he takes up a lot of space and difficult to store. After putting forth all the effort to make him serviceable again, I didn’t want to throw his pumpkin carcass loose into the storage area. I must pack him on the top and then he becomes a challenge to work around when I have to get other stuff out of storage. Therefore, he needed a place out of the way where he’d be well protected, and I won’t have to constantly work around him. Thus, the high shelf in the workshop.

Yesterday, I posted to this blog. It was the first one since May. It didn’t go very smoothly. The WordPress and Word connection no longer worked. Hopefully, this one will go through without a hitch…well, I guess if you’re reading this, it did.

I was in a bit of a rut lately. It seems that everything I touched broke and fought off the repair effort. I thought that fixing “Gord” would break the spell. Apparently, it didn’t but now with a successful noneventful construction of a high shelf, perhaps my luck will change. 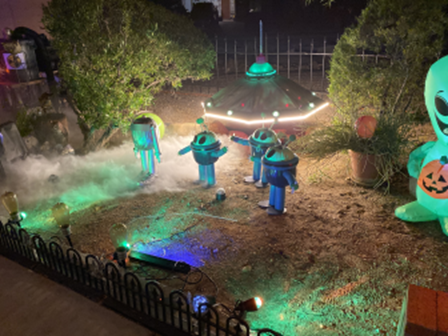 Regular readers, all two of you, will probably be wondering what I’m going to be doing for my favorite holiday this year. We won’t be having the normal party on the day before. It would have been great too since it would have been on a Friday. I’m not sure that there will be any kids out Trick-or-Treating, but I still plan on building a few new props, dragging out the old ones and decorating the outside of the house. I had a theme, and it this had been a “normal” year, I would have used it. I guess it will have to wait until next year.