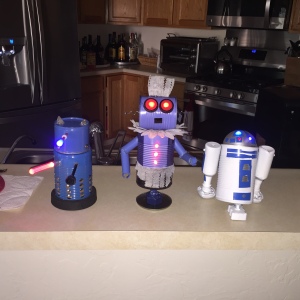 In preparation for my program at Camp Quest AZ, I’ve created 3 prototypes (pictured on the left). Certainly, there will be more. The prototypes are being used to help design a viable program for the young campers because a month ago this was just an idea. Hopefully, the kids will see these and become as excited as I am to create robots out of recycled materials

The first one I created is on the far left. Dr. Who fans will recognize it as a Dalek “one of the most feared races in the universe.” The friendly robot on the right is R2D2 from Star Wars and in the middle is Rosie the Maid Robot from the Jetsons. She is my third prototype.

These robots all have one thing in common

. They are all based on the same empty soup can. The soup can is Healthy Choice Chicken Noodle. I have a large quantity of these cans. I have it for lunch every day. The rest of the robots are constructed of items found in my workshop and in the streets near my house.

My garage and workshop are stuffed with salvaged hardware. In fact, I’m about a cardboard box away from being eligible to appear on Hoarders. Many of those valuable treasures have found their way into the pictured prototype robots.

Why am I adding this program to the Camp Quest AZ 2016 curriculum?

Last year, I brought a pine car event very similar to the BSA Pinewood Derby. It was a great event but only 6 of the Camp Quest campers elected to participate. All six were very successful but this year I wanted to develop a program which would have a wider appeal and Robots are cool! To me robots made out of recycled materials are especially satisfying. An article on making a wobble bot out of upcycled cans gave me the idea. I could have the Camp Quest campers do something similar. However, the robots in the article are too complicated and require equipment not available to summer camp campers. Additionally, I have a limited time with the kids.

The kids will start with a “basic” kit of parts including a couple of cans and some electronics components. They’ll also have a supply miscellaneous hardware items available. Then their imagination can take over! Here is how the process worked for me…

I needed to capture the essence of the Dalek. I started with the eye stock detail. All Daleks see the world through their eye stock. A piece of tubing, pony beads, and a blue LED were pressed into service.

Fortunately I had an old dead pen with a flashing LED that would make a great “exterminator.”

Dr. Who fans may not like it but I think the grappler arm on the Dalek looks like a toilet plunger. I made one out of an appliance rubber foot.

I actually had to buy the thumb tacks (47 cents at Walgreens) for the Dalek’s “bubbles.”

Black foam insulation tape became the skirt at the bottom. Originally, I had wire nuts on top to simulate the communication antennae but I replaced them with spare LED Christmas tree bulbs. 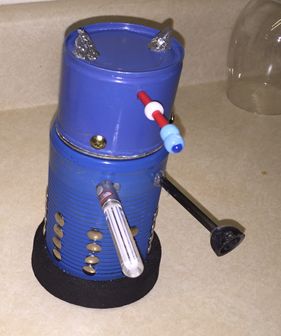 It was a simple matter to add a battery holder and a slide switch to power all the LEDs and…”Exterminate!”

The first prototype was challenging and fun but I liked the way that R2D2 sprang to life.

Here the trusty soup can is flanked by two miniature plastic bottles. The dome comes off of the top of a laundry detergent container. The rear trucks are spent car deodorizers that clip on the AC vents. The front truck was made out of an empty dental floss container.

First coat of paint was black, followed by a coat of silver and a final coat of white. I cut out some blue vinyl tape, mounted the LEDs, the switch, and the batteries and it was time to shoot the engineer. R2D2 was done! 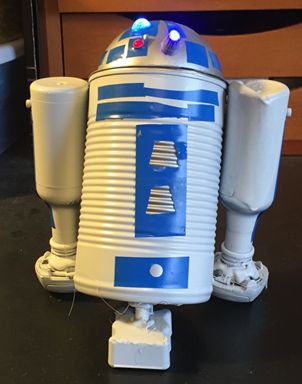 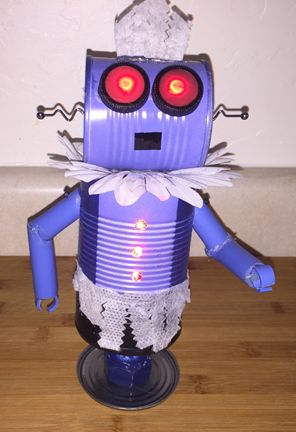 Remember the Jetsons? Here is Rosie, model XB-500 reporting for cleaning duty in the house of the future. Actually it’s another Healthy Choice soup can made up to look like something other than trash. Rosie has LED lights and fancy chrome antennae. Her arms 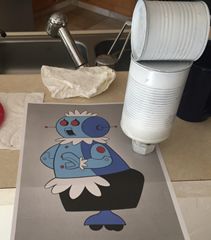 are small water pipes and her base is a lug nut. Look into her eyes and you’ll see painted water bottle lids. Her collar came off of a greeting card and her hat and skirt are what’s left of a duster.

That’s all I have for now. Certainly, there will be more. Our Camp Quest summer camp begins in the middle of July.

Next build will be the “Spout Bot” (alternately called “Beetle Bot”).

There is still time to join the fun in the Prescott National Forest. Click HERE to check out how to volunteer.