Posted on September 3, 2015 by AZAtheist 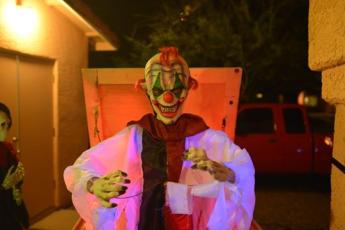 There is a website (actually several) that will give you the number of days, minutes, and seconds until Halloween. At nearly 60 days out, I’m not panicked…yet. However, I know from years past that time during this time of year starts going fast and it won’t be long until I’m hoping for an extension. Luckily, Tucson has fairly good weather during September and October for building Halloween props and displays. Now is the time to figure out what is going to be new this year. I’ll need to start ordering long lead items and preparing the workshop for the Marathon effort that is sure to come.

I’ve enjoyed handing out candy on the last day of October since I grew too old to participate in Trick-or-Treat myself. However, I always wanted to add a little extra. Building something has always been preferred to buying something. My first effort included a model train transformer and a salvaged radio speaker. The speaker was in the bushes. I sat in a chair behind a card table with the bowl of candy. When I handed over candy out of the bowl I would reach below the table and switch on the transformer. The speaker right at the feet of the person on the other side of the table would buzz loudly. Mostly, it would startle. More than once, it would make the kid jump. Rarely, a kid would scared and start crying. Even more rarely, the adult escorting a youngster would get mad and yell at me but most were in the spirit of the holiday.

The occasional detractors did not reduce my enthusiasm for making Halloween an interesting experience. One common element of the activity was the fact that I used the holiday as an excuse to build something and usually with repurposed materials. In the early efforts, it was necessary because my family wasn’t wealthy. Now that I’m a little better off and I can afford store bought props and decorations, but I still get special enjoyment out of the use repurposed materials.

For many years, my display was simply a talking pumpkin. I would hide while Nancy would pass out the candy. However, once I retired from work every year the activity became more elaborate. In 2009, I added pneumatic props and a few years after that I found a retired friend, Jack Heron, who gave me his collection of props that he built over the years. Now my little graveyard area is overflowing with Halloween “stuff” and artificial fog. There are witches circling a moon above the graveyard. Black lights cause glowing undulating ghosts to come to life. Finally, the ever present “talking pumpkin” and a 6 foot high Jack-in-the-box greets the visitors just before reaching the door where bats fly overhead and a skeleton head boasts that he can “smell fear.”

What’s new for this year? I haven’t decided yet. I’m thinking of something witchy. However, I’m itching to try out some microprocessors that I didn’t end up using on the Pinewood Derby track that I refurbished for Camp Quest this year. All my current homemade props are done using brute force or “Rube Goldberg” methods. Perhaps my next build will include the elegance of advanced electronics instead of pulleys, switches, and levers…probably more to come on this subject…