A Good Thing to do After Election Day 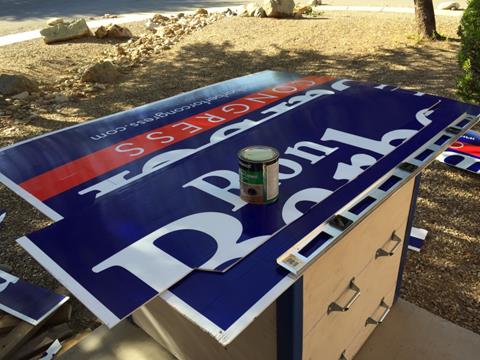 I’ve been busy with Halloween for the last several weeks and I need to get back to the series on building a secular community but not today. Today, I want to offer an idea that is particularly suited to this time of year—the day after Election Day.

The political signs that line our roadways are so ubiquitous that after a while they sometimes disappear from our consciousness. I never quit noticing them, however. In the past, I would pick up the roadway signs of those that lost in the primaries because there were a lot of them. The material is suitable for making small durable control line airplanes. Like

the one pictured here:

But this year I’m still packing up Halloween decorations and I was in need of packing boxes. So early Wednesday morning, I took off in my Ford Ranger to get some free raw materials. I didn’t have to travel far out of the neighborhood before I had a truck bed full of brightly painted Coroplast material.

I was in particular need of a box for my rapping skeleton prop that was given to me this year. He worked out great at the Halloween Karaoke gathering at the house but he’s 5 foot tall and the box he came in is only 3 foot tall. He was designed to be pushed down for packing against some strong springs but the locking pins have been misplaced and 10 year old Chinese plastic can become brittle. It would be better to pack him in a bigger box. With his head removed, I needed a 4′ high box.

out great. I cut a picture from the original packing box and taped it to the outside and it’s ready for storage for a year. Now I have to figure out what I’m going to make out of all the other signs. 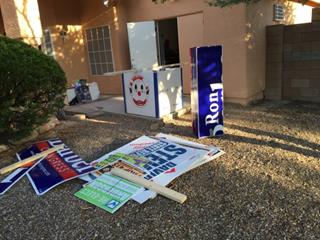 Apparently, Coroplast sign material is recyclable but it is strangely satisfying to “repurpose” this material directly and custom made Halloween storage boxes is a great application. A new cardboard box for the Rapping Skeleton would be over $5.

If you’re in need of some, grab your diagonal cutters and a pair of work gloves and get some. You’ll be cleaning up your neighborhood while getting some free useful material.